Home owners continue to keep hold of their homes for longer

The average length of ownership for residential properties is continuing to increase indicating that home owners are moving less frequently.

An important figure to be aware of is the average length of property ownership, or the ‘hold period’ of a property. The typical hold period provides one of the best indicators about the likelihood as to whether a property will be brought to the market in the near future. RP Data measures the average hold period by looking at sales over the past year and determining the length of time each of those properties had been owned (ie the most recent contract date minus the previous purchase date).

Across the individual capital city housing markets you can see that the average hold period has trended higher across each market over the past decade. The data also shows that houses in particular tend to be held for much longer in Sydney and Melbourne than they do elsewhere. 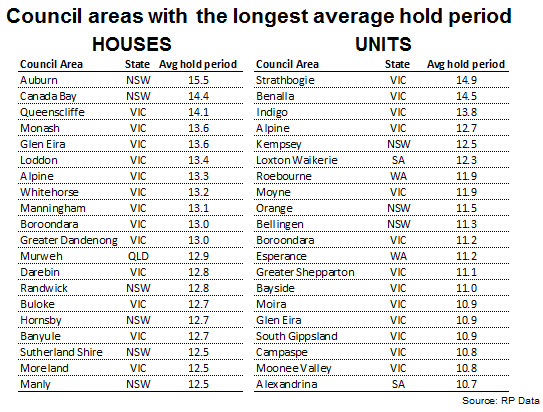 The data shows that the typical hold period is increasing. With property values rising and the subsequent transactional cost of buying and selling properties also rising it is no wonder home owners are choosing to move home on a less regular basis. The cost of agency fees and stamp duty acts as a disincentive to buy and sell property. Over the coming year we would expect that the trend towards longer period of home ownership will continue to be evident.

National Auction Market Preview - 25 April 2021
There are fewer homes scheduled for auction this week across the combined capital cities, with CoreLogic currently tracking 2,099 auctions, down on the 2,467 auctions held last week, although higher than the 413 held one year ago.
21 Apr 2021