Housing affordability: after the inquiry it’s time to execute

Australia’s latest inquiry into housing affordability and supply provides an update on some of the key issues weighing on home ownership across Australia. The report provides sixteen recommendations that can loosely be split into either supply or demand side factors that influence housing prices.

Across its 200+ pages, the report provides a valuable summary of the evidence collected during the inquiry, including a contribution from CoreLogic’s Head of Australian Research, Eliza Owen.

It is encouraging to see the report covering both supply and demand side factors, as well as addressing policy positions involving taxes, funding, developer fees and administrational inefficiencies.

The focus now moves onto evaluating and implementing the recommendations – a process that is likely to be divisive across political lines and various industry and policy sectors.  No doubt the report recommendations will fuel further debate about the best way to ‘fix’ housing affordability and reverse the downwards trend in home ownership across Australia.

For example, the recommendation to increase housing densities along existing transport spines is likely to encounter resistance from stakeholders opposed to larger populations and taller buildings in their communities.

Incentivising higher densities with ‘rewards’ such as improvements to local amenity and convenience along with measures to protect the character of housing should help to overcome local opposition and pave the way for additional medium to high density housing projects.

Focussing on the suburbs along Sydney’s rail network as an example, the average population density for Sydney SA2 regions along the train line and within 20km of the CBD has increased from 3,791 ppl/km2 to 4,069 ppl/km2, but some of these locations are still showing relatively low population densities, such as Turramurra (999 ppl/km2), Wahroonga (East)-Warrawee (1,388 ppl/km2) and Pennant Hills-Cheltenham (1,662 ppl/km2). Another major hurdle will be convincing state governments to adjust their stamp duty policies.  Through the 2019/20 financial year, stamp duty on conveyances comprised 18.1% of all state and local government revenue; a figure that has likely increased substantially over the most recent financial year due to surging housing values and record levels of transactional activity.

Using NSW as an example, stamp duty thresholds are adjusted each year in line with movements in the Sydney consumer price index. Over the past ten years, Sydney’s CPI has increased by a total of 21.8% while housing values have more than doubled, up 109.5% over the same period. The result is a significant amount of bracket creep that has pushed roughly half of Sydney dwelling sales over the past year into the highest stamp duty bracket where home buyers are lumped with a minimum of $42,240 plus $5.50 for every $100 over the upper threshold amount of $1,043,000.  Ten years ago, only 11% of Sydney properties were selling for $1 million or more.

Since the NSW Government conducted a review into stamp duty reform, which specifically involved a transition away from stamp duty towards the option of a perpetual land tax, the state treasurer has noted a move to a land tax regime is one of many options. 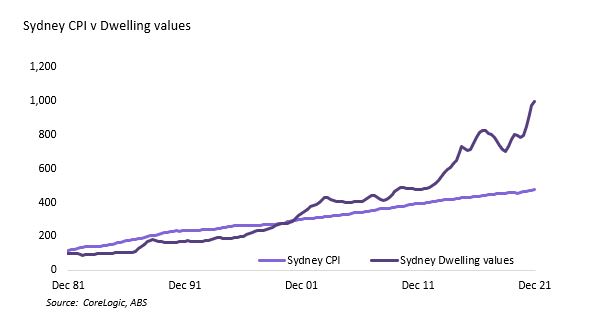 Another key element of the recommendations is to allow first home buyers access to their superannuation as a form of collateral on a home loan, despite the report noting “multiple witnesses and submitters” were against the idea of using super to purchase a first home on the basis it would drive up demand.  Previous research from CoreLogic shows raising a deposit is the biggest impediment to purchasing a home, so being able to access superannuation as security could reduce the time taken to save for a deposit.

Superannuation savings for individuals over 30 years old, are on average upwards of $35,000, with the amount of savings rising with age. Although that amount wouldn’t come close to covering a 20% deposit in most cities, it would provide some first home buyers with a substantial head start in accessing the market.

The risk here is that access to superannuation would boost demand, driving prices higher and doing little to combat the underlying issue of housing affordability, unless the scheme was accompanied by a commensurate addition to housing supply – which is a key principal of the inquiry’s recommendation. Nonetheless, housing supply is relatively inelastic to changes in housing demand, especially where changes in demand can be implemented relatively quickly through financial techniques.

Additionally, part of the issue with declining home ownership is that it has not been equal among income cohorts. Those in the lowest income quintiles in Australia have seen the most substantial declines in home ownership between 1981 and 2016. If the goal of the inquiry is to promote home ownership more widely, then approaches should be equitable. At first glance, allowing anyone to use their superannuation as a home loan guarantee would presumably most benefit high income earners. To make a scheme more equitable, its implementation may include income caps or a maximum on the value that can be used as collateral.

Another factor helping to offset the risk of super as part of first home purchases is that home ownership is recognised as a key pillar of retirement wealth.  The Federal Government's Retirement Income Review notes the importance of home ownership in achieving financial security in retirement: ‘the home is the most important component of voluntary savings and is an important factor influencing retirement outcomes and how people feel about retirement’.  The report goes on to state ‘the family home is an underutilised source to support living standards in retirement’. Overall, the recommendations from the inquiry propose some pragmatic policies that could increase densification and supply. This would likely reduce upwards pressure on housing values over time, with more housing options available over time. Refreshingly, aside from the use of super as collateral, and a movement away from stamp duty, the report did not recommend additional grants and incentives on the demand side, which have tended to push up demand historically.

However, it's worth noting Labor’s dissenting report on the results of the inquiry. Labor members of the inquiry committee did not support the report, noting part of the failure of the inquiry may have been too much focus on supply.

With a federal election just around the corner we are likely to see the home ownership debate heating up.  The recommendations from this latest report will, at the very least, provide a framework for discussion and dialogue in addressing housing affordability, and hopefully lead to long term outcomes that address the issues causing housing affordability challenges rather than simply tending to the symptoms.

Find a copy to The Australian Dream, Inquiry into housing affordability and supply in Australia here.