Fewer than 2,000 homes are currently scheduled for auction this week across the combined capital cities (1,853), with the lower volumes likely attributed to the Anzac Day long weekend.

The previous week saw 926 homes taken to auction making it the busiest Easter on record, while this time last year, there were 2,087 auctions held across the combined capitals.

Melbourne is set to host 685 auctions this week, up from 196 over the previous week, although down from this time last year when 957 auctions were held across the city.

In Sydney, 757 auctions are currently scheduled this week, up from 480 over the previous week and down slightly from this time last year (794).

Across the smaller capital cities, Adelaide is set to host the most auctions this week (165), followed by Brisbane (153), Canberra (80) and Perth (12). There is just one auction scheduled in Tasmania this week.

Last week was the busiest Easter on record, with 926 homes taken to auction across the combined capital cities, after the previous week saw 4,035 homes taken to auction which was the busiest week of the year to date. This time last year, 2,467 homes were taken to auction. Of the 921 auction results collected, 62.4 per cent were successful, down from 64.0 per cent over the previous week, continuing the downward trend we have been seeing over the past couple of months. This time last year, 78.6 per cent of reported auctions were successful.

In Sydney, 480 homes were taken to auction last week, down from 1,490 over the previous week and 919 this time last year. The lower volumes saw the clearance rate continue to fall for the 7th consecutive week, slipping below 60.0 per cent for the first time since the w/e 23rd January (54.9 per cent), coming in at 58.9 per cent last week. The same week last year recorded a significantly higher clearance rate across the city (81.5 per cent).

Across the smaller capital cities, Canberra recorded the highest final auction clearance rate (80.0 per cent), followed by Adelaide (71.2 per cent), Brisbane (58.8 per cent), and Perth (50.0 per cent). There were just eight auctions held in Tasmania last week, with six of them reporting a successful result. 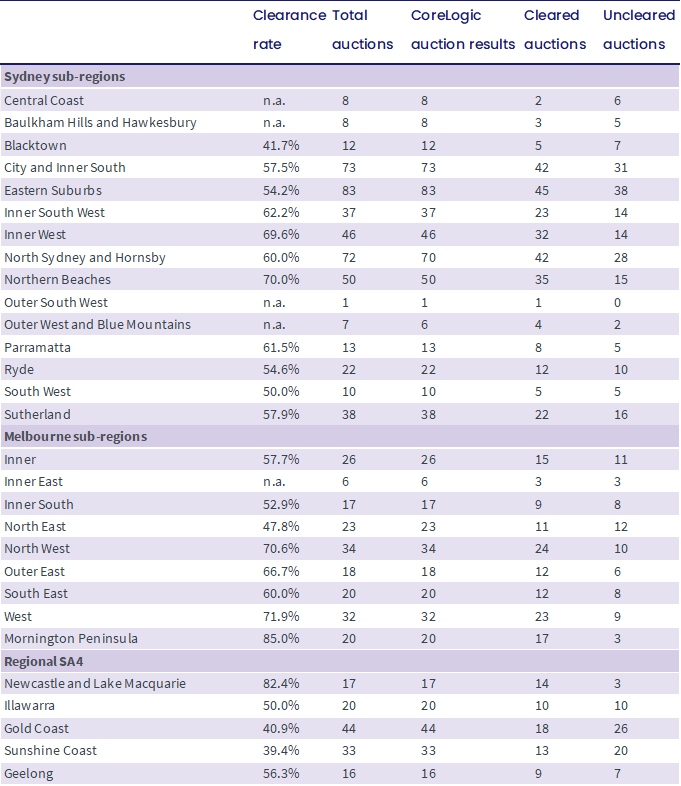