Surging home values caused by a global environment of low interest rates, tight supply and strong buyer demand may have widened the wealth gap between those that own housing, and those that don’t, amplifying the need to understand trends around women and home ownership.

In January 2022 in Australia, 26.6% of residential property had female ownership, compared to 29.9% male ownership. In the 12 months to January, CoreLogic estimates the total value of Australia’s residential market surged from just over $7 trillion to $9.7 trillion, with dwelling values rising 22.4%, or $130,000 at the median value level over the same period.

“Given there’s a high level of equity held in real estate, if you don’t own property, that’s a big source of household wealth and security you don’t have access to. Property price growth has also vastly outpaced income growth over this time, with the gender pay gap widening in parallel, too,” says Ms Malev.

Ms Malev says a key implication of this for property ownership is that men can save a home deposit much faster on average than women.

“The current discrepancy in incomes between men and women would see men save a 20% deposit for the current median dwelling value around a year faster than women. That means men are not only accumulating greater wealth from a higher proportion of existing property ownership, but they’re also able to get into the market sooner than women and start that wealth accumulation in a growth market.

“When you delve into the data at a more granular level, such as the proportion of ownership by property or ownership type, some startling new insights have been revealed in this year’s report,” says Ms Malev.

Eliza Owen, CoreLogic Australia’s Head of Research and report author, says this finding has greater implications for the gender wealth gap between men and women.

“What this means is that house owners accrue a lot more value over time compared to unit owners. The nominal gains in the median Australian house value over the past decade totalled around $340,000, compared with $197,000 for the median unit gain.”

Portion of purchases by males, females and mixed ownership - Australia 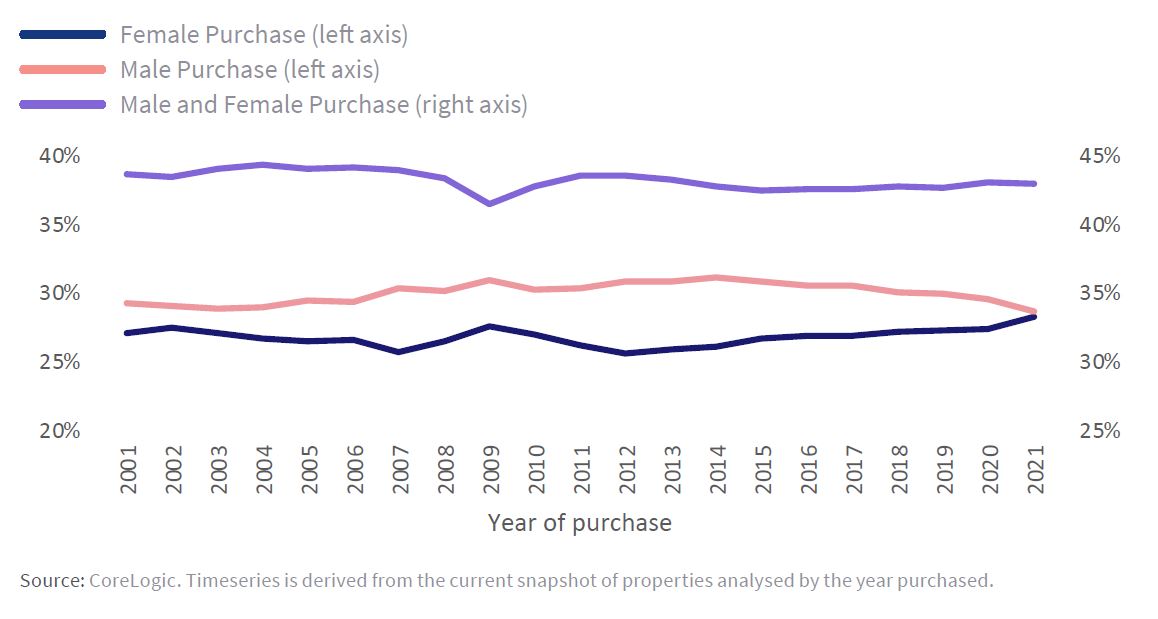 The report found male ownership is generally higher in markets dominated by detached house stock, such as in resource-based markets like Perth. This also has implications for wealth gains, because resource-based markets have seen more aggressive fluctuations in value, and generally less value than cities like Sydney and Melbourne. However, even in markets with more gender parity, such as Greater Melbourne, men still owned a higher portion of houses (29.9%) than women (25.7%).

“Our data suggests that around 70% of the discrepancy between male and female residential property ownership in Australia is accounted for by ownership of investment properties,” Ms Owen says.

“The portion of investment properties owned by men was also higher than the rate of joint male and female ownership of investment properties (34.5%). While it is hard to say what drives this discrepancy, it is notable that men have higher representation in property as an investment. We don’t know whether this is a reflection of multiple property ownership being more common among men, or if it’s a response to affordability constraints (such a rent-vesting strategy), but this seems to drive most of the gap in residential property ownership.”

Share of residential purchases by women are gradually rising over time

Australian women are narrowing the property gender gap, with a time series of purchase date by gender showing the share of female purchase of property is rising over time.

Ms Owen says “Australia shows a really interesting trend where there’s a marginal shift, year by year, of women purchasing a slightly higher portion of properties, and men purchasing a slightly lower portion. Joint purchases have remained steady over time, but did see a dip in 2009 that may have been associated with a surge in first home buyer activity. This positive trend may start to reflect greater gender parity in home ownership over time.”

As noted in the inaugural Women & Property report in 2021, in Australia there is a more defined relationship between dwelling values and the rates of female ownership than there is between male rates of ownership and values.

What the findings mean for Australian and New Zealand institutions

The findings from the report suggest that there is a notable gap in male and female property ownership, that does not match the broader population. Significant gains in property prices are good for wealth accumulation, but without parity of ownership across different cohorts, this can also widen inequality, and those with a lower incidence of home ownership may need additional support in retirement.

The findings from CoreLogic show that in Australia, there has been increasing parity in property purchases among men and women, though it is interesting so much of the existing disparity in ownership reflects a higher ownership of investment property among men.

The discrepancy in house and unit ownership is also an important finding, given that houses have generally accumulated more value than units over time. This could warrant further research into why women have a higher incidence of unit ownership. It would be useful to discern whether this comes back to affordability constraints, where the gender pay gap and differences in workforce participation between men and women also play a role.

A full summary of ownership by gender across the analysed Australian SA4 regions and New Zealand TA regions can be found in the report, free to download here. 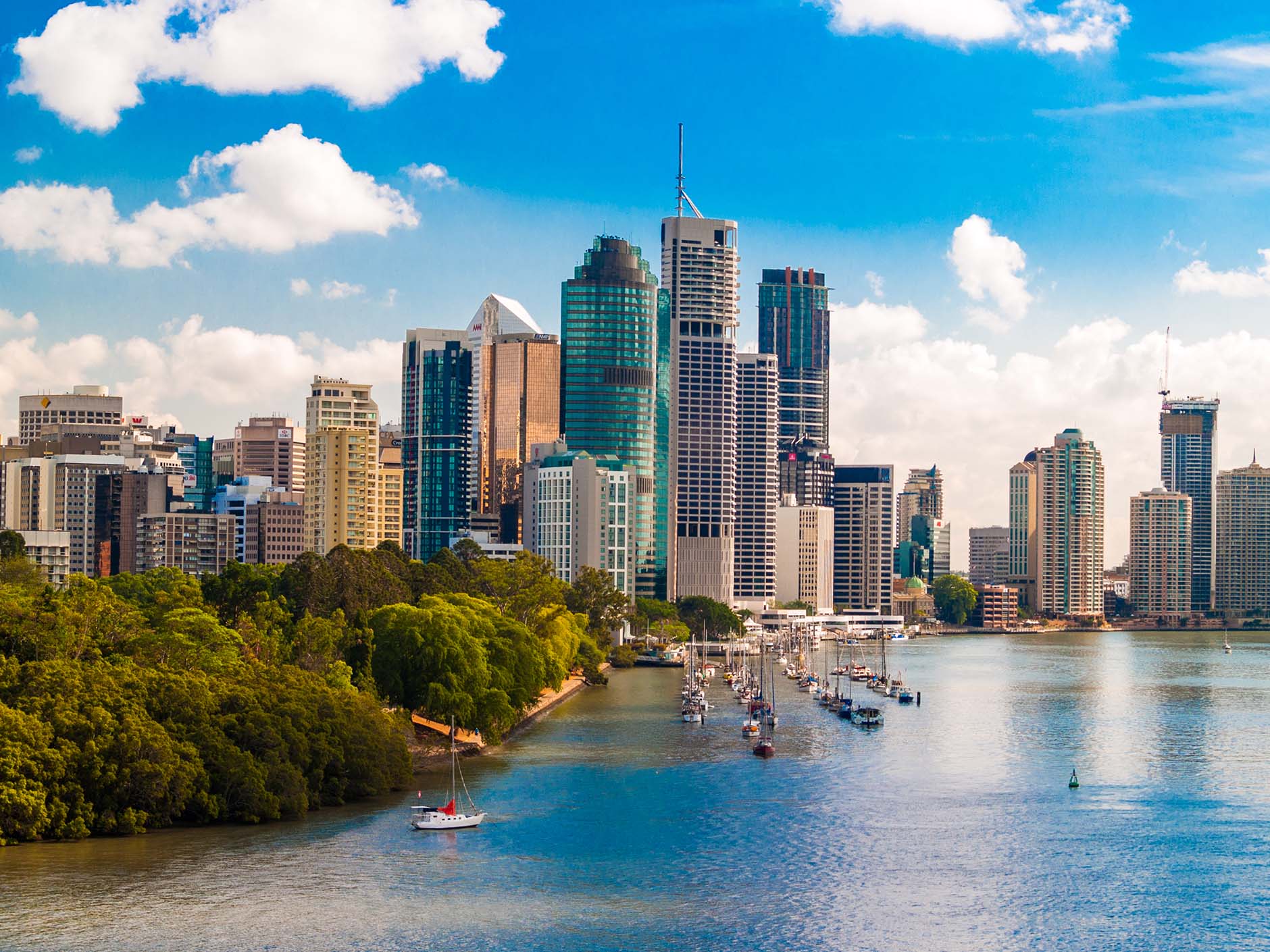