Continuing the trend seen through the year to date, this week’s auction market activity is up 20.7% week-on-week and up 36.2% compared to this time last year (2,128) with 2,898 auctions held across the combined capital cities. Of the 2,420 results collected so far, 74.6% recorded a successful result up from last week’s final clearance rate of 73.5%, but down from its preliminary clearance rate of 75.7%. With 478 results outstanding, it's likely this week's results will be revised down at final figures and could mark the end of the upwards trend in clearance rates seen throughout the year to date. This time last year 79.6% of auctions held were successful. Hosting 45.8% of this week auctions, Melbourne was the busiest auction market for the second consecutive week. With 1,328 auctions held across the city, Melbourne’s auction volumes are up 27.8% week-on-week (1,039). Of the 1,141 results collected so far, 74.2% were successful, making Melbourne the only capital to record a rise in its preliminary clearance rate. Last week Melbourne recorded a preliminary clearance rate of 70.3%, which was later revised to 69.7% at final figures. Compared to this time last year, when 77.4% of the 1,095 auctions held were successful, this week’s auction activity was up 21.3%. 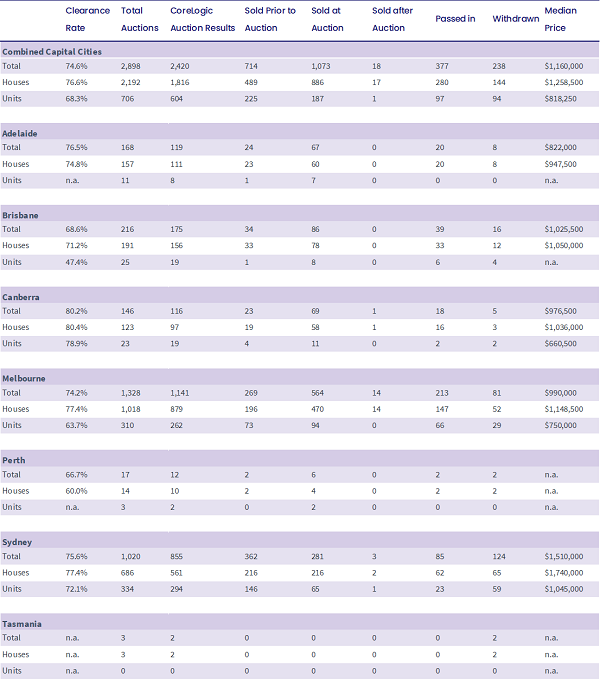 Across the smaller capitals, clearance rates fell across the board as auction activity recovered following last week’s small dip. With 550 homes taken to auction across the smaller capitals, the volume of auctions held this week was more than double the number recorded this time last year (265). Recording the highest clearance rate for the fourth consecutive week, Canberra was the only capital to record a preliminary clearance rate in excess of 80% with 80.2% of the 116 results recorded so far returning a positive result. Adelaide’s clearance rate fell, from 78.5% the week prior to 76.5% this week, while the 24.1% rise in Brisbane’s auction activity saw its clearance rate fall to 68.6%. Across Perth 66.7% of auctions held were successful, while two results have been collected across Tasmania, none of which were successful. 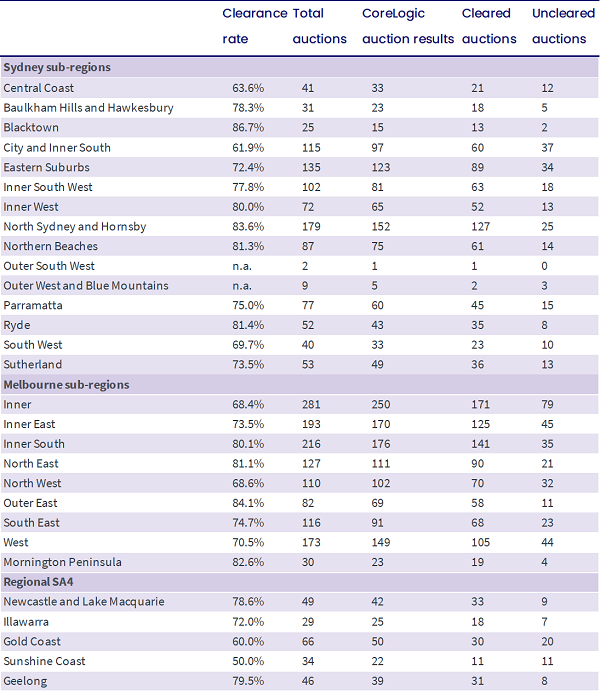