With 4,086 capital city homes set to go under the hammer, this week is set to be the busiest auction week of the year to date, and the fifth busiest since CoreLogic records commenced in 2008.

With 4,086 capital city homes set to go under the hammer, this week is set to be the busiest auction week of the year to date, and the fifth busiest since CoreLogic records commenced in 2008. Up 27.3% from the week prior, when 3,209 homes were auctioned, this week marks the fifth time expected city capital city auction volumes have exceeded 4,000. This week's volumes are up 85.8% compared to the number of auctions held this time last year (2,199), where low volumes resulted off the back of the Easter Break. With the exception of Brisbane and Perth, all of the capitals are expected to host the busiest week of the year to date.

Across Sydney, 1,554 homes are scheduled for auction this week, up 36.8% from the 1,136 that occurred last week. This week is predicted to overtake the week ending 27 February (1,202) as Sydney’s busiest auction week of the year, and it's fourth busiest week on record. This week’s expected volumes are just 237 auctions shy of the record volumes recorded in mid-December 2021 (1,791). This time last year 821 auctions were held across Sydney.

Across the smaller capitals, scheduled auction activity is up 33.6% this week, with both Canberra and Adelaide expecting the busiest week of the year to date. Adelaide (302) is set to host the most auctions amongst the smaller capitals, with scheduled auction volumes expected to exceed 300 for the first time this year, while Brisbane is set to take 230 homes under the hammer this week. Canberra’s expected auction activity is up 36.4% compared to the week prior, with 206 homes scheduled for auction.  22 auctions are scheduled to occur in Perth this week, while four auctions are expected to occur across Tasmania.

Melbourne hosted the most auctions last week, with 1,501 homes taken to auction. Compared to the week prior, when 1,626 auctions were held, last week’s auction activity was down -7.7%. Melbourne recorded a small rise in its clearance rate with 67.0% of auctions recording a successful result, up from 64.0% the previous week. Melbourne hosted 211 auctions this time last year, 73.5% of which were successful.

Sydney was the only capital not to record a decrease in auction activity last week, with 1,136 homes auctions across the city. This is up 2.9% from the week prior, when 1,104 auctions were held, and makes last week Sydney’s second busiest auction week of the year so far. Sydney’s clearance rate recorded a 20-basis point decline last week, from 64.0% to 63.8%. This time last year 82.0% of the 404 auctions held were successful.

Auction activity fell across all of the smaller capitals last week after Brisbane and Adelaide recorded their busiest week of the year the week prior. Down -14.4% from the previous week, Brisbane maintained its position as the busiest auction market amongst the smaller capitals, taking 208 homes to auction last week, 65.9% of which were successful. Adelaide’s clearance rate rose 3.6 percentage points compared to the week prior (75.4%) with 79.1% of the 196 auctions held recording a successful result. Canberra’s clearance rate recorded a small increase, from 72.9% to 73.3%. Across Peth, 11 of the 17 auctions held were successful, while no auctions were held in Tasmania last week. 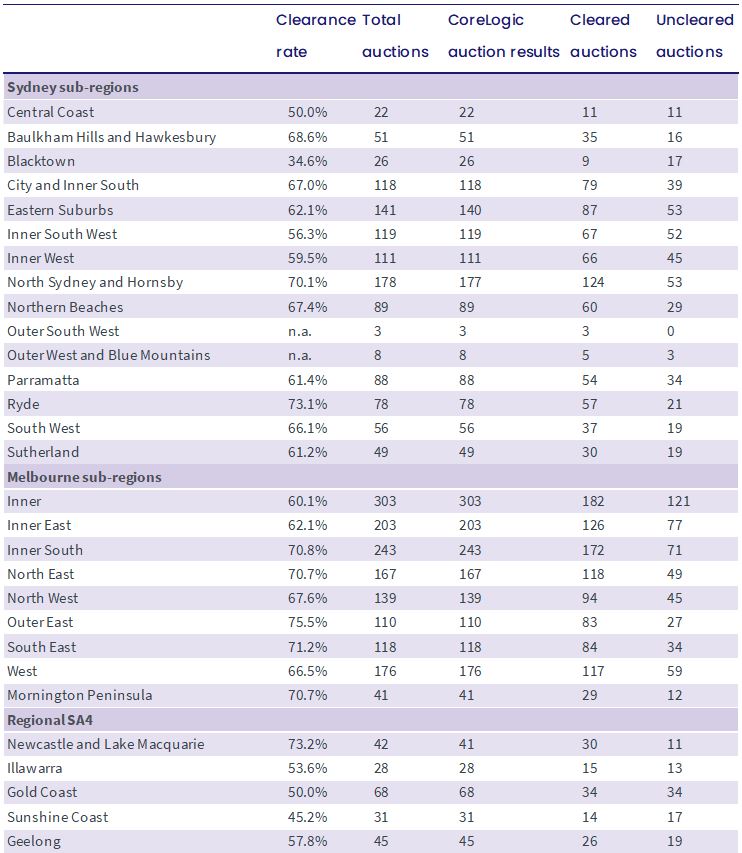