Auction volumes have risen sharply this week, with the combined capitals expecting the busiest auction week since the pre-Easter seasonal spike.

Auction volumes have risen sharply this week, with the combined capitals expecting the busiest auction week since the pre-Easter seasonal spike. Predicted auction activity is up 42.4% compared to the previous week, with 2,931 homes set for auction across the combined capital cities. The previous week saw 2,059 homes auctioned across the capitals, while 2,905 homes were auctioned this time last year.

Melbourne is set to host 43.9% of this week’s scheduled auctions with 1,288 homes set to go under the hammer across the city. Compared to the previous week, when 905 auctions were held, this week’s auction activity is up 42.3%, but down -4.2% from the 1,345 auctions held this time last year.

Sydney’s scheduled auction activity is set to exceed 1,000 for the first time in five weeks with 1,001 homes scheduled for auction this week. This week’s auction activity is up 51.9% compared to the previous week (659), but down -13.0% from the 1,150 auctions held this time last year. Sydney’s withdrawal rate remained high last week with 21.8% of last week’s auctions withdrawn.

Across the smaller capital cities, Adelaide is expected to host the most auctions for the second week in a row, with 260 auctions scheduled across the city, up 26.8% from the week prior (205). Brisbane is expecting its busiest auction week since late March (243) with 234 homes set to go under the hammer this week, while Canberra’s auction activity is up 53.6% this week compared to the week prior (84) with 129 homes scheduled for auction. Across Perth, 16 homes are scheduled for auction, while three auctions are expected to occur in Tasmania this week.

Across Melbourne, auction activity was down -29.8% compared to the week prior, with 905 homes auctioned across the city last week. The previous week saw 1,290 homes go under the hammer, while this time last year auction activity was 35.9% higher (1,411). Melbourne's clearance rate slipped below 60% for the first time since mid-September (58.5%), when Melbourne was in COVID lockdown, with 59.8% of auctions held last week reporting a successful result. Compared to the week prior, last week’s results were down 3.9 percentage points (63.7%), while this time last year 74.1% of auctions held were successful.

In Sydney, 659 homes went to auction last week, down -27.9% from the 914 auctions held the week prior and down -42.5% compared to this time last year (1,146). Having trended downwards since mid-February (75.4%), Sydney’s clearance rate fell to its lowest point since mid-January (54.9%) with 55.3% of auctions held last week reporting a successful result. At the same time, Sydney’s withdrawal rate (21.8%) rose to its highest rate since mid-December 2021 (22.3%) suggesting less confidence amongst sellers. As Sydney’s selling conditions continue to weaken, it is likely Sydney’s withdrawal rate will continue to rise. 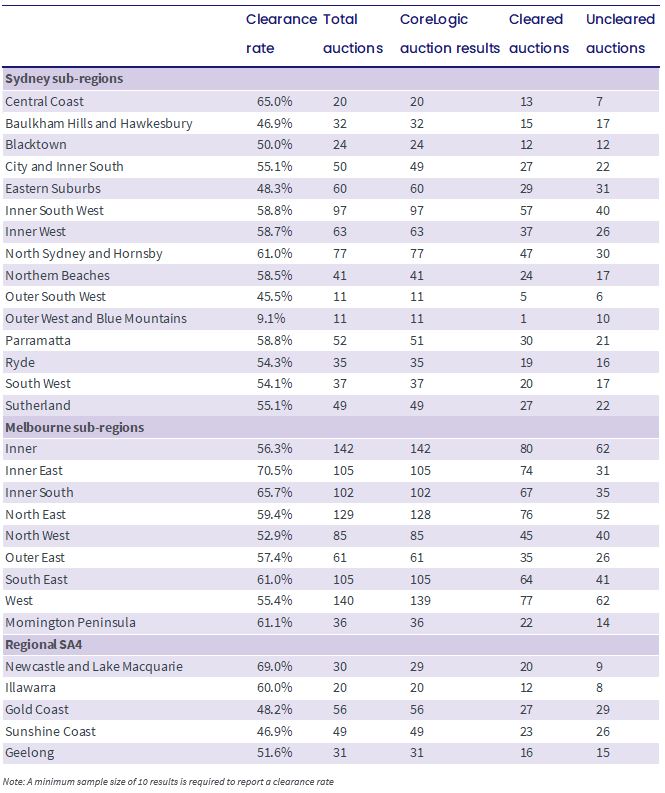 Recovering from the election week slump seen last week, the combined capital cities are expecting the busiest week since