Spotlight on Women and Property – House vs Unit ownership

The 2022 Women and Property report furthered our knowledge of the potential gender wealth gap in Australia. Areas of low house ownership among women tended to correlate with areas that also showed lower rates of female home ownership in general, which largely constituted pockets of Queensland and Western Australia.

However, it is also worth noting that some of the most expensive house markets in the country also have relatively high rates of detached house ownership, including Sydney’s City and Inner South, the Eastern Suburbs and the North Sydney and Hornsby region. Of the 76 SA4 markets analysed, these were three of 11 markets where women actually had a higher rate of home ownership inferred than male owners.

Overall, the disparity between rates of male and female ownership in Australian houses and units could have implications for the gender wealth gap perpetuated through the property market, because houses have generally out-performed units over time in terms of capital growth.

The divergence between house and unit performance has been particularly prominent through the current upswing. Houses have been in relatively high demand, with ABS data suggesting owner-occupiers have made up a high 72.1% of mortgage finance for property purchases through the current upswing (compared with a decade average of 64.1%). Owner-occupiers tend to have a preference toward houses over units, and this preference may have been exacerbated by people spending more time at home through the course of the pandemic, and seeking accommodation that is more spacious.

The result is the current upswing has produced extraordinary gains in detached house values over units. Since the onset of COVID in March 2020, national house values have risen 28.1%, compared with 13.7% in the unit sector. The premium between house and unit values across the capital cities is at a record high of 42.8% as of February 2022. Figure 2 shows the dollar value difference between median house and unit values over time across the capital cities. In east-coast cities in particular, this premium has grown rapidly through the current upswing. 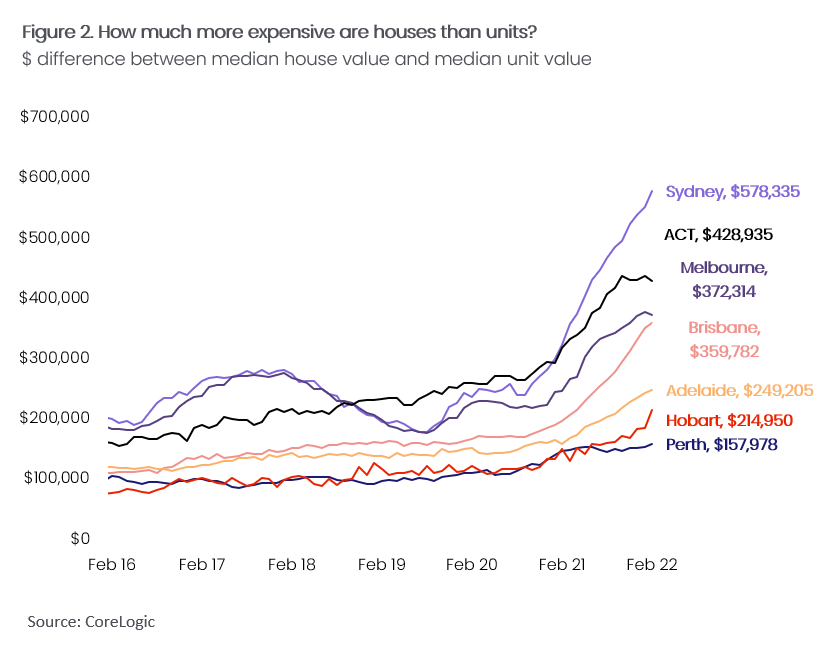 The higher gains from houses relative to units have been particularly strong through the current upswing, but are also a long—standing feature of the Australian real estate market. For the past 20 years, annual growth rates in Australian house values have trended 1.4 percentage points higher than in the unit segment.

So, if gains from houses are generally higher, why did we find women generally have higher rates of home ownership in the unit segment? One answer may be affordability constraints, with women’s lower rates of full time pay, and greater participation in lower-compensated sectors of work (such as part-time work) placing limitations on the ability to overcome the deposit hurdle for houses. It is also worth noting female and male rates of ownership are lower in the house segment, and this could be because most male and female ownership types are single owners. Not only are houses potentially too large for single buyers, but would be harder to attain for single owners from an affordability perspective. Single women may also be motivated by security features of apartment complexes, such as intercoms, and proximity to neighbours.