Auction volumes were up 38.7% week on week as auction activity surges in the larger capital auction markets.

Auction volumes were up 38.7% week on week as auction activity surges in the larger capital auction markets.

Melbourne is set to host the most auctions this week, with auction activity expected to exceed 1,000 for the first time this year. With 1,033 homes set to go under the hammer, this week’s volumes are up 77.5% compared to the previous week (582), and 62.7% compared to this time last year (635).

After starting the year off strong, auction activity across the smaller capitals is down this week with scheduled auctions down 18.9% compared to the previous week (597). Despite the week on week decrease, this week’s auction activity is still more than double that seen this time last year, when 236 homes were taken to auction across the smaller capitals. Brisbane is expected to host the most auctions this week with 182 auctions scheduled, followed by Adelaide (160) and Canberra (118). 20 homes across Perth are expected to go under the hammer this week, while four auctions are scheduled to occur in Tasmania.

Across the combined capital cities 1,779 homes went to auction last week, up 52.6% from the 1,166 hosted the week prior. Surging auction volumes continued to be a feature of the 2022 auction market, with last week’s auction volumes up 36.4% compared to this time last year (1,304) and more than double the 5-year average (827). Despite the continued surge in volumes, the combined capitals clearance rate held steady (72.5%), up 10 basis points compared to the previous week (72.4%). This time last year 79.3% of auctions held recorded a successful result.

Similar to Sydney, Melbourne recorded a rise in both auction activity and clearance rates last week, with 74.7% of the 582 auctions held recording a successful result. Compared to the week prior, when 394 auctions were held, last week’s auction activity was up 47.7% but was down 5.4% compared to this time last year (615). Last week’s clearance rate was the highest seen since late Oct 2021 when 75.2% of auctions held were successful. The previous week recorded a clearance rate of 67.5% while this time last year 76.0% of auctions were successful.

Auction activity surged across the smaller capitals last week with Brisbane, Canberra and Adelaide all recording volumes more than double those recorded this time last year. Canberra (83.6%) recorded the highest final clearance rate for the second consecutive week, followed by Adelaide (82.4%). Brisbane recorded its lowest clearance rate since Jan 2021 last week with 56.2% of the 219 auctions held returning a successful result. The low clearance rate was largely driven by an above-average withdrawal rate (21.2%) – its highest since May 2020 - amid a series of storms over the weekend. It is likely a number of these withdrawals will be rescheduled in the coming weeks. In Perth, 13 of the 36 auctions held recorded a positive result (36.1%), while just two auctions were held in Tasmania, one of which was successful. 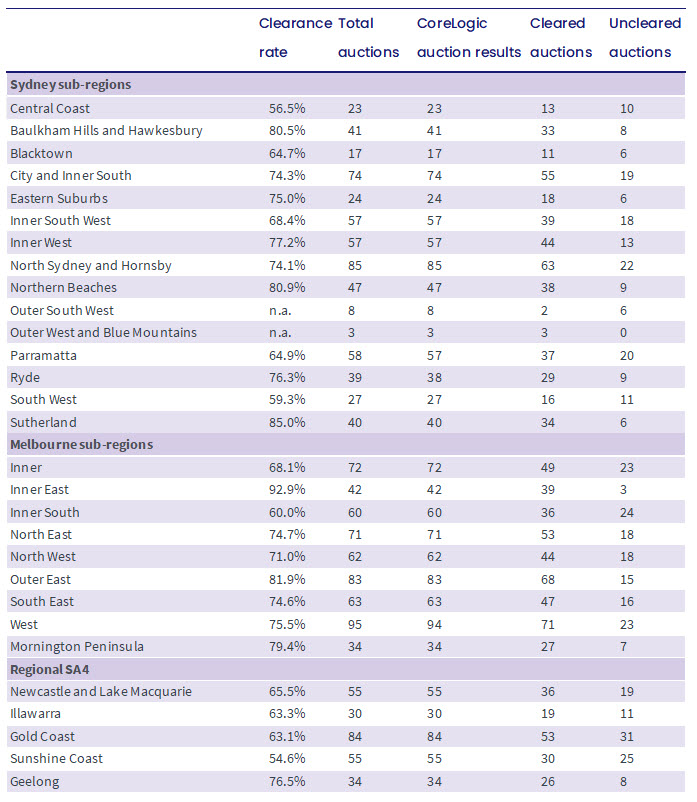