Auction activity continues to rise across the combined capitals with scheduled auction volumes up 48.2% over the week. CoreLogic is currently tracking 1,728 capital city homes set to go to auction, up from 1,166 auctions last week. Auction activity has ramped up faster than in previous years with this week’s volumes 32.5% above those recorded this time last year (1,304) and more than double the 5-year average (827).

Sydney is set to host the most auctions this week, making up 34.8% of this week’s auction activity. Across the city, 602 homes are scheduled to go under the hammer, up 81.9% from the 331 auctions held the week prior. This time last year 447 homes were taken to auction.

Clearance rates rose across most of the capitals last week despite the number of auctions more than doubling week on week. Last week 1,166 homes were taken to auction across the combined capitals. This was up 167.4% compared to the previous week (436) and up 31.9% compared to this time last year (884). Despite the increase in volumes, clearance rates rose, with 72.4% of auctions held recording a successful result. A clearance rate of 66.0% was recorded the week prior, while this time last year 77.2% of auctions held were successful. Last week’s clearance rate was the highest recorded since the middle of November (73.2%), prior to the record-breaking auction volumes seen in December last year.

Melbourne’s auction activity ramped up sharply this week, with auction volumes up 181.4% compared to the week prior (140). Despite auction volumes more than doubling, the Melbourne clearance rate rose from 60.4% the previous week to 67.5%. This time last year Melbourne hosted 390 auctions, 80.0% of which were successful.

Sydney also recorded a rise in clearance rates last week, despite recording auction volumes more than four times those seen the previous week. 66.3% of the 331 auctions held last week were successful compared to 54.9% of the 73 auctions held the week prior. This is the first time Sydney has recorded a week on week rise in the clearance rate since early October 2021 (81.6%), prior to the easing of COVID lockdown restrictions. This time last year 76.7% of the 270 auctions held recorded a successful result. 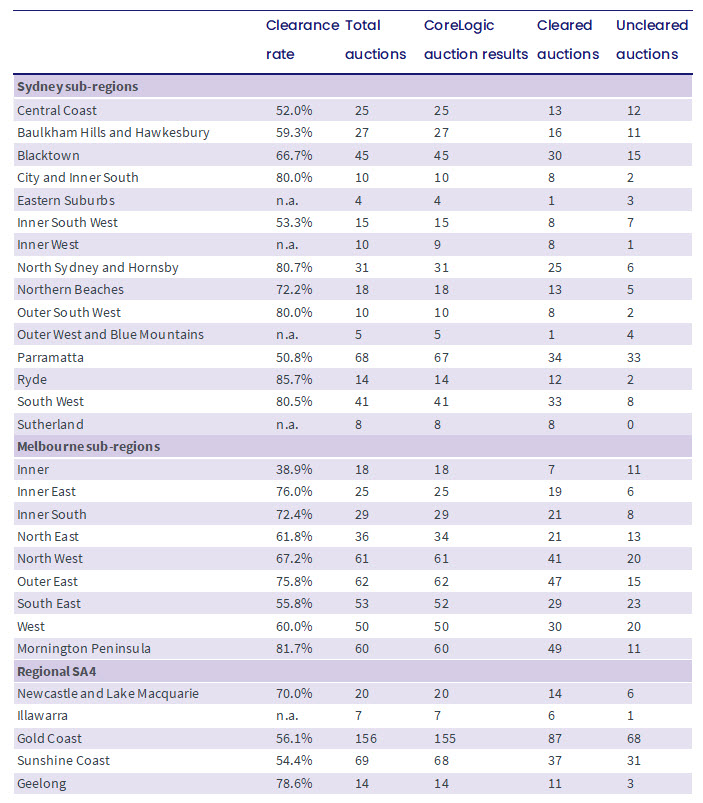