The popularity of capital cities continues to grow

Recently released data from the Australian Bureau of Statistics (ABS) shows that to June 2013 the rate of population growth in capital cities was significantly greater than that of regional markets.

As the first chart shows, from 1995 onwards capital city populations have consistently increased at a faster rate than those in regional areas. In June 1991, 64.6% of all Australian’s lived within a capital city and by June 2013 the proportion had risen to 66.3%. 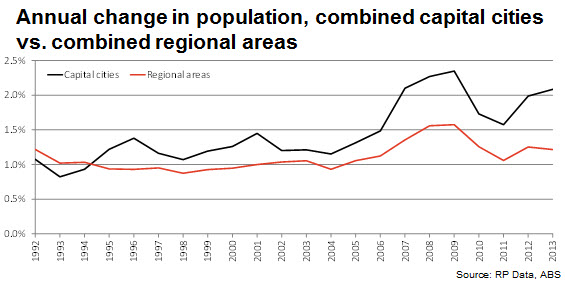 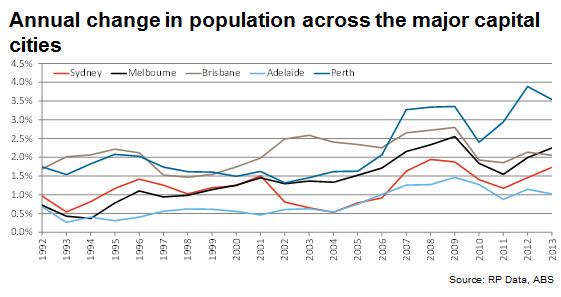 The rising prominence of Brisbane and Perth as population centres has really emerged over recent years. Obviously the resources sector boom has driven this to some extent with escalating demand for professionals working and associated with this sector. With home values rising at a much faster rate in Sydney and in Melbourne than in other capital cities it will be interesting to see over the coming years if we begin to see an outflow of population from Sydney and Melbourne to other capital cities where housing is more affordable and attainable for the typical buyer. Of course a key driver of any shift away from Sydney and Melbourne will be providing well paid jobs and a high quality of life while ensuring that housing remains relatively more affordable than it is within Sydney and Melbourne.

First Home Buyers’ Scheme With Eliza Owen - Corelogic Head Of Residential Research Australia
The first home loan deposit scheme (FHLDS) commenced 1st of January 2020. It is a leg-up over the deposit hurdle for first home buyers (FHB) struggling to accumulate a sizeable deposit, providing eligible Australians the opportunity to buy their first home with a deposit of at least 5% of the home’s value.
7 Jan 2020

Corelogic December 2019 Home Value Index: A Strong Finish For Housing Values In 2019 With The Corelogic National Index Rising 4.0% Over The December Quarter
Dwelling values rose by 1.1% over the month of December and by 4.0% over the quarter to finish out 2019 on a positive note according to the CoreLogic national home value index.
2 Jan 2020

The Final Week Of Auction Reporting For The Year Sees The Combined Capital City Clearance Rate Drop Below 70 Per Cent, As Volumes See Their Usual Seasonal Taper
There were 2,750 homes taken to auction across the combined capital cities this week, with volumes down by -5.6% on last week’s 2,912 auctions; the second busiest week of 2019.
16 Dec 2019