Total outstanding housing credit is increasing at a moderate pace compared with the historic trend however, with housing credit aggregates and household debt also starting to rise it may raise some alarm bells with the Reserve Bank.

Each month the Reserve Bank (RBA) releases financial aggregate statistics which detail the amount of credit lent by domestic financial institutions. The latest data to May 2014 shows that outstanding credit grew by 0.4% over the month and is 4.7% higher over the year. The annual increase was comprised of a 6.2% rise in housing credit, a 0.3% increase in other personal credit and a 2.7% increase in business credit.

As the first chart shows housing credit is currently and has historically been the main driver of the overall expansion in credit. 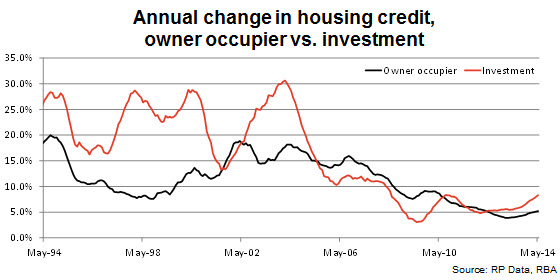 The annual change in owner occupier housing credit reached a recent low of 3.9% between January and March of 2013 indicating that the recent rise has been quite strong. Investment housing credit troughed at an annual increase of 4.8% in January 2012 and has since increased to 8.3% annual growth. Clearly growth in investment lending has been very strong over the past 18 months, in-line with the growth in home values which has been recorded since mid 2012.

If we look at the total value of outstanding credit, we can also see that the vast majority of lending by financial institutions is for housing as opposed to other personal or business loans. Data from the RBA shows that as at May 2014, a record high 60.6% of all credit was for housing, a record low 33.2% of credit was to business and 6.2% was for other personal credit provisions. Of course, there is only so much money available to be lent by Australian financial institutions and they are showing a clear preference of lending for mortgages. In fact, lending for mortgages has been the preferred option for banks consistently since April 2001, right as the housing market started to boom.

The likely reason for the preferential treatment of lending for mortgages over businesses is the ongoing relatively strong performance of mortgages. Despite internal and external shocks there haven’t been long-term mass declines in home values and mortgage arrears rates have remained low. Furthermore, mortgagees have seen equity in their homes increase and they have used this to fund alternate investment and in some instances fund the start-up of small businesses. Until these conditions change it is hard to see why financial institutions wouldn’t prefer to fund mortgages rather than businesses which have been more risky to lend to. That of course is not to say that the performance of the housing market won’t change and the current preferential treatment of mortgage lending is a guide to the future lending preferences of financial institutions.

Each quarter the RBA publishes data on the ratio of household debt to disposable income. The latest data to March 2014 shows that the ratio of total debt is 149.9% which is its highest since September 2010. The ratio of housing debt was recorded at 135.8% which is its highest on record. With home values rising and credit growing households are taking on additional housing debt. One would think that this is the most problematic development for the RBA. Household debt levels are already high (much higher than public debt) and although household savings has increased over recent years there has been no significant reduction in household debt levels and they are now rising.

With a greater number of people looking to purchase homes we are seeing housing credit once again escalating which has now flowed through to a rise in household debt. We have no doubt that both RBA and APRA will be keeping a close eye on household and housing debt levels as growth in national home values continues. If debt levels continue to rise it is likely to be a potential cause for concern with households becoming more indebted at a time when interest rates are so low. When interest rates inevitably rise in the future, some households may find it harder to repay that debt.

Four charts that show regional returns in a league of their own
There has been no shortage of reporting about the relatively strong performance of regional Australian dwelling markets over 2020. December home value data showed the combined regional  dwelling market increased 6.9% in value over the year; a growth rate more than three times the rate of the combined capital...
22 Jan 2021

North Sydney Ends Year On A High
The North Sydney CBD ended 2020 on a high with several large sales transacted. Included is 60 Miller Street at $273 million through Knight Frank Sydney. Dexus sold the building, which last traded at $73.5 million in 1998, to Ever Rich International Investment Pty Ltd. Ever Rich is owned by Chi Ming Yeung of...
21 Jan 2021