Home values, particularly in Sydney and Melbourne, are growing at a rapid pace but as values rise affordability pressures are likely to see housing demand fall away.

The RP Data-Rismark Stratified Hedonic Index measures the performance of the capital city housing market across different segments. Specifically the Index looks at the 25% of most affordable suburbs, the middle 50% of suburbs and the 25% of most expensive suburbs.

As the first chart shows, the strongest growing market over the past year has been the most expensive 25% (11.2%) compared to the lowest level of annual growth across the most affordable 25% of suburbs (9.1%). Although all segments of the market are recording relatively strong value growth, over the first quarter of 2014, the top 25% of the market recorded value growth which was more than double (4.4%) that of the most affordable segment (2.0%).

Looking across the major capital cities at the most affordable 25% of suburbs, in each city except for Perth they have recorded the lowest annual growth across the three market segments analysed. In Sydney, values are up by 15.2% over the year in this segment, 7.4% in Melbourne, 3.0% in Brisbane, 3.7% in Adelaide and 8.8% in Perth. 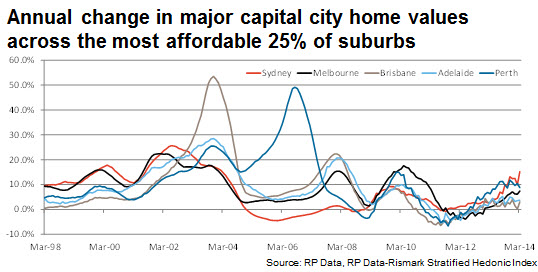 Across the middle 50% of suburbs in the major capital cities, in all instances except for Sydney and Perth, the rise in values over the year have been greater than those across the most affordable suburbs but lower than those across the most expensive suburbs. Over the year, values have increased by 16.3% in Sydney, 11.0% in Melbourne, 5.1% in Brisbane, 4.0% in Adelaide and 6.6% in Perth.

The most expensive suburbs across the major capital cities have generally recorded the strongest value rises over the past year. The exceptions have been Sydney where growth has been slightly stronger across the middle 50% of suburbs and Perth where it has been the weakest performing segment. Over the past year, values across the most expensive market segment have increased by 16.1% in Sydney, 12.6% in Melbourne, 5.3% in Brisbane, 4.9% in Adelaide and 4.0% in Perth.

Over the first quarter of 2014, the most affordable suburbs have once again recorded the lowest level of value growth in each of the major capital cities except for Perth where the most expensive suburbs recorded weakest growth.

With the rate of value growth already slowing across the more affordable segment of the market it potentially indicates, particularly in Sydney and Melbourne that lower priced purchasers are already starting to be priced out of the market. Despite exceptionally low mortgage rates we believe that at some point natural affordability barriers will enter the market. Obviously interest rate hikes would slow the market quicker but even with the absence of hikes at some point the market itself will start to consider that selling prices are unreasonable and slow their purchasing activity. Clearly we are not yet at this stage in Sydney and Melbourne but the historic data would suggest as the premium market grows at a more rapid pace value growth generally begins to slow across the more affordable segments.

Of course the fundamentals vary greatly on a city-to-city basis. Value growth is already slowing in Perth and has not yet been particularly strong in either Brisbane or Adelaide. In Sydney and Melbourne the strength of the premium market segment could indicate that a slowdown in value growth is just around the corner, with or without mortgage rate increases.

Our response to Australia’s bushfire crisis
For over three months, Australia has been ravaged by catastrophic fires that have now escalated to unprecedented levels. CoreLogic is coming together and partnering with our customers to provide support to those impacted and play our part in helping to rebuild homes and the communities of which they are a...
20 Jan 2020

First Home Buyers’ Scheme With Eliza Owen - Corelogic Head Of Residential Research Australia
The first home loan deposit scheme (FHLDS) commenced 1st of January 2020. It is a leg-up over the deposit hurdle for first home buyers (FHB) struggling to accumulate a sizeable deposit, providing eligible Australians the opportunity to buy their first home with a deposit of at least 5% of the home’s value.
7 Jan 2020

Corelogic December 2019 Home Value Index: A Strong Finish For Housing Values In 2019 With The Corelogic National Index Rising 4.0% Over The December Quarter
Dwelling values rose by 1.1% over the month of December and by 4.0% over the quarter to finish out 2019 on a positive note according to the CoreLogic national home value index.
2 Jan 2020